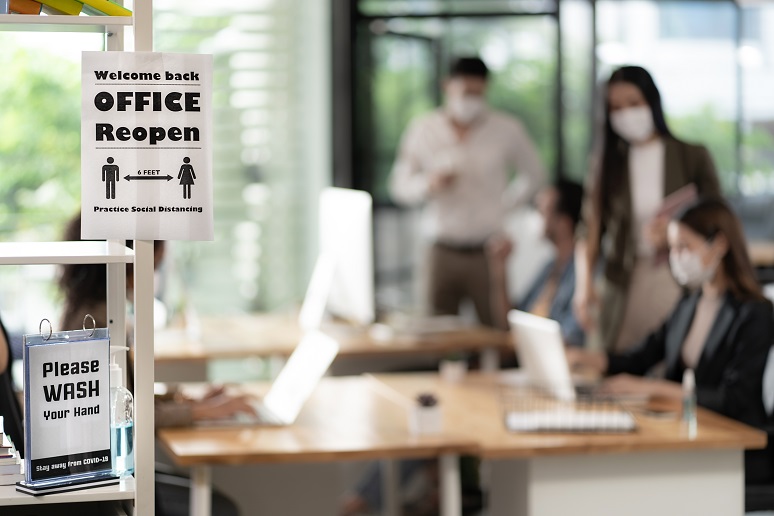 (Bloomberg) -- Few of the corporate world’s leaders have been as effusive this year as Jamie Dimon in cajoling office workers back into pre-pandemic routines, arguing his army of bankers at JPMorgan & Chase & Co. can’t tend relationships nearly as well on Zoom.

But those views met their match this week as the bank prepared to resume an annual in-person gathering for, of all industries, biotechnology executives -- many of whom are involved in fighting Covid-19.

Instead, JPMorgan on Wednesday said it moved the annual health-care conference online after industry bellwethers Moderna Inc. and Amgen Inc. announced that they wouldn’t fly employees in for the closely watched event in San Francisco. The decision, confirmed by a company spokesperson, follows a Bloomberg News report that the bank was reconsidering plans for the gathering, long known for overcrowded panels and late-night parties. The event was forced online last time.

“The health and safety of our clients and employees is of the utmost importance, and given the ongoing Covid-19 pandemic, we have made this decision,” the firm said in a memo to clients. “We were not only hopeful to meet in-person but also understand how much this conference means to the San Francisco community, which we fully support.”

Many dealmakers, industry executives and investors are eager for a chance to meet and set the stage for future business -- which Dimon has said is much harder to do remotely.

But JPMorgan’s employees had been fielding calls from concerned members of the health-care industry wondering if the event could really take place as planned. And amid surging Covid-19 cases in the U.S. and the threat of more infections posed by the omicron variant, some companies began discreetly asking JPMorgan for virtual access to the conference’s main presentations, according to people with knowledge of those talks.

Then on Tuesday, Alnylam Pharmaceuticals Inc. Chief Executive Officer John Maraganore ratcheted up the pressure on his peers and the bank, writing on Twitter that the conference “should go virtual to avoid a super-spreader event and a PR disaster for our industry!” (He noted that he hadn’t planned to attend anyway.)

I’m not going anyway this year ! But #jpm22 should go virtual to avoid a super-spreader event and a PR disaster for our industry! My $0.02! https://t.co/Ac2UpOXBJ6

The 40th annual conference, scheduled for Jan. 10-13, is the investment bank’s flagship event for the health-care industry, and Dimon himself usually does a keynote presentation.

Even though it’s going virtual, some attendees privately said they will hold off on canceling travel to see if executives might still fly out and keep meetings. One senior banker who competes with JPMorgan noted he set up outings to play golf and attend a sporting event with clients -- and that he hopes those won’t fall through.

“There’s no substitute for the in-person experience and the ability to create relationships,” Eli Lilly & Co. Chief Financial Officer Anat Ashkenazi said in an interview, acknowledging she was looking forward to attending, just before JPMorgan announced the shift online. Lilly is one of the best-performing large-cap pharmaceutical companies, up more than 60% year-to-date.

Yet across California, Covid infection rates are up 47% since Thanksgiving, leading the state on Monday to implement tighter measures on masking and vaccines. San Francisco has some of the country’s most stringent Covid restrictions, requiring people to be vaccinated for entry to large indoor events, restaurants and bars. The city is also home of the first U.S. confirmed case of the omicron variant.

The gathering’s location has long been criticized by some attendees because of San Francisco’s high prices, homelessness crisis and street crime -- an issue that has gained national attention recently after a spate of high-profile robberies in the Bay Area. Representatives for San Francisco Mayor London Breed and the local health department didn’t respond to messages left Tuesday seeking comment about the conference. That day, Breed separately announced plans for measures to reduce crime, including expanding patrols in areas heavily trafficked by tourists.

Dimon, 65, has praised technology such as Zoom for keeping business going during temporary lockdowns, but bemoaned the prospect of conducting meetings that way in perpetuity. He’s knocked remote work for slowing decision-making, stifling creativity, upending Wall Street’s apprenticeship model and making it harder to solicit candid feedback from customers about products and services.

Earlier this year, Dimon and Goldman Sachs Group Inc. CEO David Solomon led a push within the financial industry to summon employees back to Manhattan skyscrapers, helping to revive restaurants and other businesses that depend on legions of bankers commuting into the city. By July, JPMorgan was requiring staff to come into offices at least some days. Some of the financial world’s own conferences -- such as the Milken Institute Global Conference in October -- have since resumed as well.

Moderna and Amgen, with market values of $110 billion and $120 billion, respectively, rank among the largest biotechnology companies in the U.S. Both confirmed that they wouldn’t attend the conference in person, but didn’t elaborate on their decision-making process.