Do You Dream of a VR Workplace?

Virtual reality might be the future of work but let’s not lose sight of what matters — collaboration and productivity. 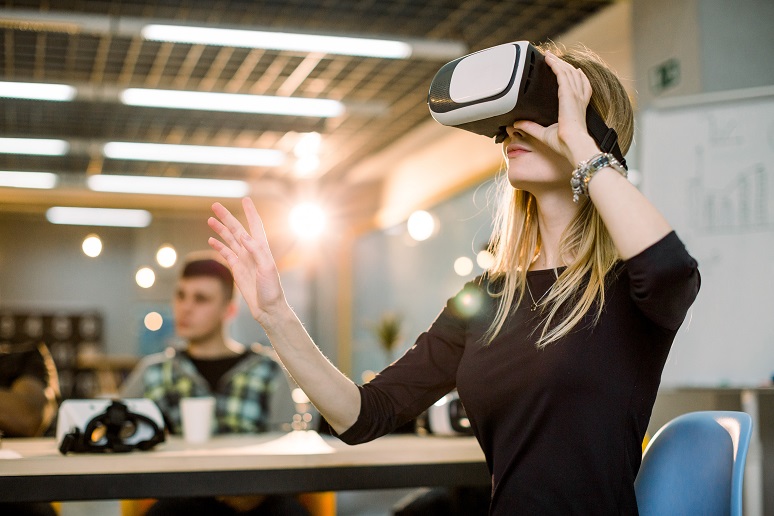 Image: sofiko14 - stock.adobe.com
When we think of the future of work, many of us tend to envision a COVID-influenced office with socially distanced desks, conference room occupancy limits, lots of colleagues still working remote, and HR policies to reinforce safe working. However, some workplace strategists are bolder in their dreams, going full sci-fi Hollywood with holograms and spaces that mix real life with virtual reality (VR). For them, enter Microsoft Mesh.
Using this newly announced mixed-reality platform, developers will be able to integrate VR and augmented reality (AR) into applications, Microsoft shared at its big Ignite event for customers and partners. During an opening keynote presentation, Microsoft showed how teams across the world will be able to use Mesh to collaborate in a shared virtual space — architects in one office collaborating with another architect working from home, for example. The idea is simple enough: When you can’t all meet in person, meet in a VR/AR space.
You can easily imagine how an enterprise might put this technology to use for collaboration more broadly. Instead of firing up a video meeting, team members would don their VR headsets and either beam into a physical location alongside workers there in person or into a completely virtual space. The upside is you get to see the full body presence of coworkers, not crammed in a small video box; the downside is you can’t get away with wearing your pajama pants for your nine o’clock meeting anymore.
And by no means is Microsoft the only one playing in the VR/AR space. Last week, my colleague Dana Casielles wrote about startup PORTL, which uses a combination of hologram technology, cloud software, and a content management system to project an image of a person inside a PORTL box. And on WorkSpace Connect’s sister site, No Jitter, technology analyst Brent Kelly recently shared how IKIN is enabling holographic communications. And of course, major technology vendors like Apple, Facebook, Google, Sony, and others already have or are working on VR/AR products and services.
While VR is beginning to play a role in limited use cases within collaborative enterprises, I don't see many rushing to buy VR headsets for their general population of employees — especially with continued concerns about the pandemic and prepping for a hybrid workforce consuming their time and effort.
First, let’s consider the financial cost and the IT effort that’ll go into deploying and managing a fleet of VR devices. Doing a quick search on headset prices, I found that the Oculus Quest 2 headset cost around $300, while Microsoft’s HoloLens 2 costs $3,500. Though Microsoft has committed to making the Mesh platform available to a range of VR and mobile devices, equipping every worker with a VR headset would be costly even for a small organization. Additionally, organizations would have to weigh VR alongside arguably more pressing technology concerns.
Device costs aside, organizations will also have to provide on-going tech support for these devices, and they will most surely take up already stretched-thin bandwidth. It’s not to say that VR is impossible, but making it work in any workplace isn’t as simple as plugging the device in and letting the collaboration good times roll. Like everything, there is a cost, and it’s not always purely in dollars and cents.
So, if we want to fundamentally change how we collaborate, I’d argue we not only need to dream big but practically, too. The sky might be the limit, but a tight IT budget can bring those dreams crashing to earth. And IT won’t make these decisions in a vacuum. They will need to work alongside HR, real estate/facilities, and other professionals to create the future of work — whether that’s VR, remote, or hybrid.