An HR exec for Royal Ambulance shares how the company uses Workplace from Facebook as a platform for communications, collaboration, connectivity, and community 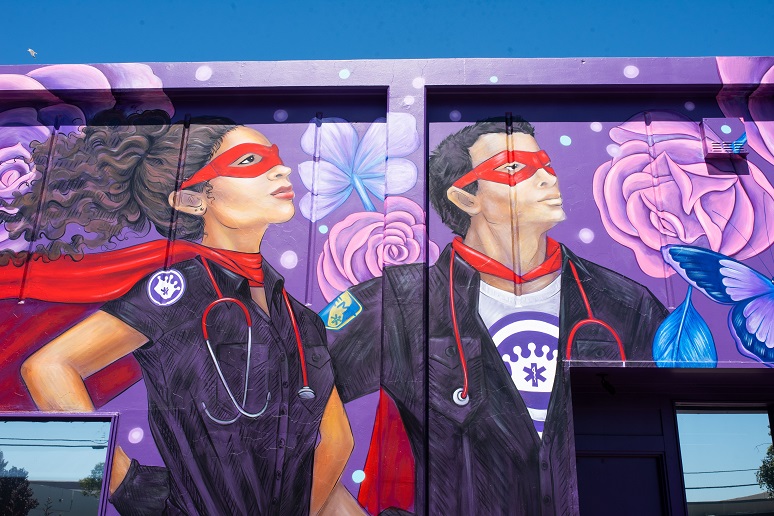 Royal Ambulance honors its EMT heroes in a station mural.

Image: Royal Ambulance
Royal Ambulance, serving the greater San Francisco Bay area, takes the “royal” in its name to heart… as in, it very much aims to provide patients the royal treatment. Eve Grau, VP of HR for Royal, puts it this way: “We always talk about the scope of an EMT as limited, but how you make somebody feel as unlimited.”
And making patients feel positive about their experience, as difficult or frightening as that may be depending on the nature of the emergency, means treating employees royally, too, Grau says. “Early on, we realized that there was no way our people were going to provide an exceptional patient experience if we did not replicate an exceptional employee experience. … People who are happy and empowered and feel like they are supported innately are going to give back.”
Royal is all about “engagement, collaboration, transparency, and connectivity,” Grau. It has a culture of empowerment that it thinks makes Royal stand out among emergency medical services providers, she adds.
As an example, she talks about the journey of an EMT, who often sees the role as a steppingstone to a career as a physician’s assistant, in nursing, or as a firefighter. From day one on the job, Royal talks with an EMT about their ultimate goal, and then facilitates learning and knowledge exchange with people on the same career path or alumni who have already left the company and are working in their career field.
Much of that, especially during the pandemic, has been facilitated via Workplace from Facebook, an online collaboration platform that Royal has been using since it hit the market some five or so years ago. Stymied in its efforts to engage with its EMTs and other employees via email, Royal had set out to look for a better way to support a connected and collaborative workforce. After a few misses, it hit on Workplace, which employees could use with no learning curve.
Today, Royal supports some 15 to 20 formal groups in Workplace. In the “Shifts Happen” group, EMTs can take control of their own scheduling, trading shifts with one another (even bartering or providing incentives like $20 or a batch of home-baked cookies). And in a Praise & Props group, as part of a formal process, field training officers (FTOs) now publicly congratulate their trainees for passing their field tests and share photos. “It’s a win-win,” Grau says. “The trainee feels good, the FTO feels good, and everybody who is part of the organization will go in and say their congratulations and ‘can’t wait to meet you.’ It allows people to get excited and share in one another’s successes.”
So successful has the Workplace Praises & Props group been that Royal now even mimics it with a praise wall at each of its stations, Grau adds. “We want to maintain the Workplace vibe and the content that it creates for a longer period of time,” she says. So, monthly, HR goes through the Workplace group and selects praises to print out for posting at each station. Employees at those stations can use markers, pins, frames, and cameras that Royal makes available to add their own stuff to the praise wall, she adds.
Grau says that she has no doubt that Workplace has helped elevate Royal’s culture. “What we wanted is an environment that allows people not only to grow professionally and personally but be surrounded by a community of other people who support one another, from the top-down and bottom-up” — and it got all that and more. “It’s about communication. It’s about collaboration. It’s about connectivity. It’s about community.”

Turning Wellness from Transactional to Transformational

In this Workspace News Wrap, workers continue to report high levels of satisfaction with remote work, and economists predict that remote work is likely to stick