In this Workspace News Wrap, workers continue to report high levels of satisfaction with remote work, and economists predict that remote work is likely to stick 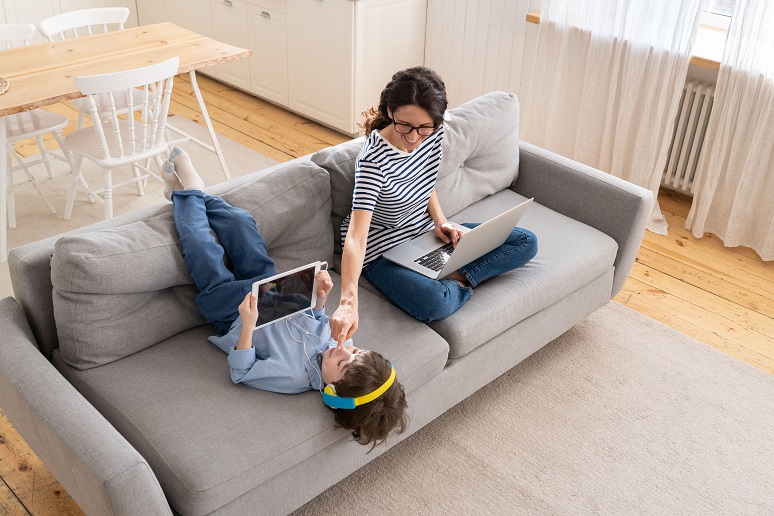 Image: Dmitry Marchenko - Alamy Stock Photo
Welcome to the latest WorkSpace Connect News Wrap, our periodic recap of the news related to the modern workplace, the professionals that make it happen, and the products and services that enable it. In this edition, Qualtrics finds that remote work boosted employees' overall job satisfaction and work-life balance; and a research group including the Dallas Federal Reserve predicts that most remote work habits will persist in some form.
Qualtrics: Remote Work Has Improved Workers' Households Substantially
The company, which collects and analyzes employee experience-management data, found that remote work has positively impacted a majority of remote workers' households. Data shows 95% of remote workers reported that their pets were happier, 89% reported that their kids were happier when their parents were working at home, and 68% of those workers, say they grew closer to family members.
Remote work has also had a positive impact in the workplace: 43% of workers say their work-life balance has improved, compared to 18% who said it got worse. The gap between more positive outcomes persisted in job satisfaction (39% say it went up, compared to 20% reporting a decline), career progress (36% reporting improvement, more than twice the percentage of correspondents reporting a decline), and finances. Just as many workers said, their mental health has declined—31%—as those who reported it's improved.
"It's clear that the past two years have brought lasting change to work-life for American employees," head of the employee experience advisory services at Qualtrics, Benjamin Granger, Ph.D., said. "As we enter a new phase of COVID, where measures like remote work and social distancing may become optional, it's time for us to take stock of what we've learned so we can be intentional about what changes from the pandemic are worth keeping and which should be discarded. It's critical that leaders don't forget how flexibility and new ways of working have made life better for employees."
Related: A recent New York Times story reported that some workers prefer remote work because it sidesteps the awkwardness of a negative employee experience. As one interviewee reported:

“There’s not much point in returning to the office if we’re just going back to the old boys’ club,” said Keren Gifford, 37, an information technology worker in Pittsburgh who has not yet been required to return to her office. “What a relief not to have to go in day after day, week after week, and fail at making friends and having fun.”

The article goes on to recap Future Forum's research, which found that working mothers and people of color were more likely to have found remote work beneficial to their jobs than white men.
Telework Persisting Beyond Expectations, Researchers Find
According to Bloomberg News, an analysis by researchers from Arizona State University, Virginia Commonwealth University, and the Dallas Federal Reserve found that work-from-home situations rose for every major demographic group and industry but was especially sharp among highly educated workers.
The research team predicted 75% of the increase in telework throughout the COVID-19 crisis is likely to persist—one in every five workdays will be remote, and twice as many workers will be 100% remote as before the pandemic.
In separate research, the city of San Francisco put together a five-year financial plan published in January that estimates that office workers will permanently telecommute about 15% of the time in the fiscal year 2025-2026. The persistence of remote work will likely affect city planning and revenue for years.
The Atlantic argues that "workers want to get out of their homes, but they absolutely do not want to return to the old office. In a tight labor market, mandating a return to work in sterile, stale offices will produce costs to recruitment and retention that should be weighed against the costs of modernization."
Editor's Note: We'll be at Enterprise Connect next week, learning all about the latest workplace strategies and the must-have technologies for the changing workplace. There's still time to register for the in-person and virtual events. See you there!

When Navigating Your Company's Org Chart Becomes a Job Skill

Lisa Schmeiser
December 08, 2022
A worker typically has to bring multiple skill sets to their job. In addition to the mastery of the role-specific tasks that comprise...

EX and CX Integration: Why You Need a ‘Better Together’ Strategy

Depending on the kind of work being done, teams can embrace non-simultaneous work to create or sustain work-life balance.

What Workplace Leaders Can Learn From the Great Resignation

Pew Research cites low pay, lack of opportunities, and disrespect at work as reasons for a high-quit rate. Here’s what else we know so far, as told by industry experts.