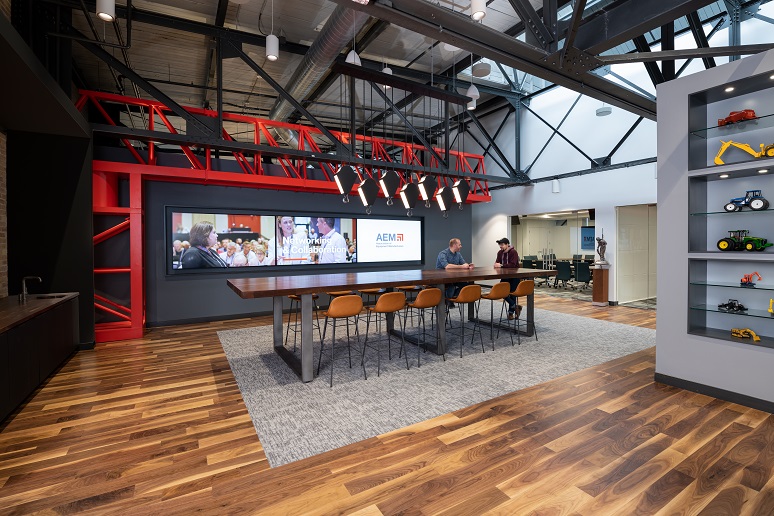 When workers at the Association of Equipment Manufacturers (AEM) — a repeat top workplace winner in its region, as I mentioned in my previous post — begin transitioning back to the office next month, they’ll have the added boon of coming back to a space that still has that “new car smell,” as Judy Gaus, VP of HR and Operations, called it in a recent conversation with WorkSpace Connect.
That’s to say, AEM had just completed a rebuild of its office space when COVID-19 rolled in and it needed to send workers home to shelter in place. “We were sad that we had just completed the space and then had to leave, but it’s very cool to be able to go back somewhere that is brand new,” said Gaus, whoplayed a critical role in rethinking the office given her HR and facilities responsibilities.
AEM’s decision to reconstruct its office space with collaboration in mind turns out to have been a bit serendipitous. The space, Gaus said, is perfectly suited to the association’s goal of having people work three days per week in the office come September and two days of the week from home. Which days an employee spends where is up to their discretion, but the obvious advice is that they come into the office so they can participate in cross-functional meetings and for collaborative work, she explained.
Prior to the redesign, the AEM office space featured lots of private offices and cubicles with six-foot walls that made the environment very dark, Gaus said. Now, AEM has an open office; everybody has a low-walled cube — no private offices — and the space is much airier. And the space is large enough, at 27,000 square feet for 106 employees, to more than accommodate social distancing, she added.
Pre-redesign, meetings took place in seven designated conference rooms. While the new office also has traditional conference rooms, per request of staff members on the reconstruction team, it features more than 20 perimeter spaces for collaboration, Gaus said. For example, small teams can get together for a conversation on couches sprinkled throughout the office, and people meeting one-on-one can grab a booth in the company’s café/multipurpose room, she said. In addition, the front reception area features café-like stool seating and open mezzanines provide another space for casual meetups.
“We’ve really tried to introduce a mix of different seating arrangements and environments where staff can just choose where they feel more comfortable meeting for whatever reason it might be,” Gaus said.
As you might imagine, being able to meet here and there throughout the office made collaboration tools and mobility critical success factors for the new office — and guidance from AEM’s IT director was imperative to the redesign, Gaus said. In terms of technology, for example, AEM gave everybody Microsoft Surface tablets, with the Microsoft Teams app for team collaboration and video meetings, so nobody would be tied to their desk because that’s where their PCs were. In addition, for ease of use, IT made sure all the audio-visual gear was plug and play and consistent from one conference room to the next, she added.
With workers soon to begin filtering back into the office, Gaus noted the importance of not only having the niceties afforded by the redesign but also of having a “welcoming environment where people feel respected and valued.” That, she said, is the secret to AEM’s success.
“It’s a journey, and we always try to look for things that we can do to get better,” Gaus concluded. “We’ll never rest on our laurels.”

Future of Work: Including the Environmental Impact

Enterprises that are serious about limiting their carbon footprint will likely need to add sustainability officers to future-of-the-office discussions.