Hotdesking might have done away with "the corner office with the great view," but is there still a place for (in)formal hierarchies? 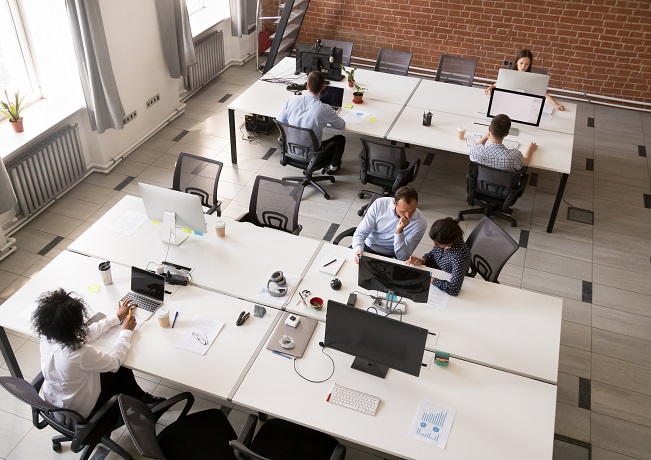 Image: fizkes - stock.adobe.com
One positive side effect of WeWork’s travails seems to be that, whatever the merits of the company’s business model, it’s drawing attention to the belief that office workers need a different kind of environment to do their best work. This article from The Economist homes in on something I tend to fixate on in this space: For all of the theory that gets applied to the broader issues of office productivity and collaboration, when actual arrangements are made and spaces built out, old hierarchies tend to assert themselves.
“All this looks like a shift towards an airline-style world of work, with economy seating for the drones and business-class luxury for skilled workers, who enjoy some of the benefits once reserved for senior executives,” The Economist author writes. “But this is a hard trade-off to get right.”
Indeed it is, and I’d argue that’s the challenge and opportunity facing workspace professionals today: to take advantage of technology and new ideas about office space so as to give more people the benefits of a more human approach to work and collaboration.
Remote work is one key to such a democratization. Why force someone, however low on the org chart, to come into an office and be a drone if that person can use collaborative tools to work remotely, and would prefer to do so? Obviously new hires and those with unique job demands might have to be an exception. But maybe it’s time for supervisors to rethink some ideas that seem to have lingered from previous generations—for example, the idea that someone who wants to move up in the organization has to show their face in the office as part of their dues-paying.
Another potential democratizing force, hotdesking, has its own challenges, as another Economist article points out. This columnist, writing under the pen name Bartleby, has some old-school complaints about hotdesking—this is someone who seriously believes in clutter and dead trees as a creative force. But they also make some good points about the realities of hotdesking, especially as relates to the office pecking order. Bartleby notes that, even if seating is designated as first-come, first-served, people will lay informal claims to certain spots, and the force of their claims will likely be in direct proportion to their organizational status.
But I also think that even this aspect of hotdesking could be mitigated by making remote work more common. If your enterprise uses a hybrid hotdesking system, where folks who work in the office most or all days get an assigned desk while occasional office workers get hotdesking, I think there’d be fewer issues over the best seats. Presumably the best spots would go to full-time office denizens, while occasional office workers—who, by definition, feel less invested in the office as their workplace—shouldn’t be offended by having to take whatever they can get on the few days they come into the office.
In the end, nobody really knows in advance how a change to a workspace and work practices will affect employees. As The Economist suggests, it’s a tradeoff. One idea that seems to have worked in some enterprises, at least for major renovations or relocations, is to run pilot tests of the different ideas under consideration for the new space. Zurich NA insurance company took this approach when it was building its new headquarters in Schaumberg, Ill., and garnered high marks in employee satisfaction and team interaction in the new space.
Hierarchies are inevitable, but part of HR’s job, with the support of IT and office-design pros, is to shape those hierarchies, make them manageable, and direct their energies and efforts toward what’s best for the enterprise as a whole. The rigid structures of previous generations are disappearing; today’s enterprise leaders will decide, for better or worse, what replaces them.

Design Your Workplace to Support All Staff Equally

Global workspace design firm Unispace's COO and CPO explain how to design your workplace with neurodiversity in mind through education, physical spaces, and choice.

Companies must create spaces for neurodiverse employees, according to design firm HOK. Here are some key guidelines.

Savvy developers could capitalize on the park/work balance in these places to boost employee wellbeing.

The Virtual Office: What Challenges Does It Solve?