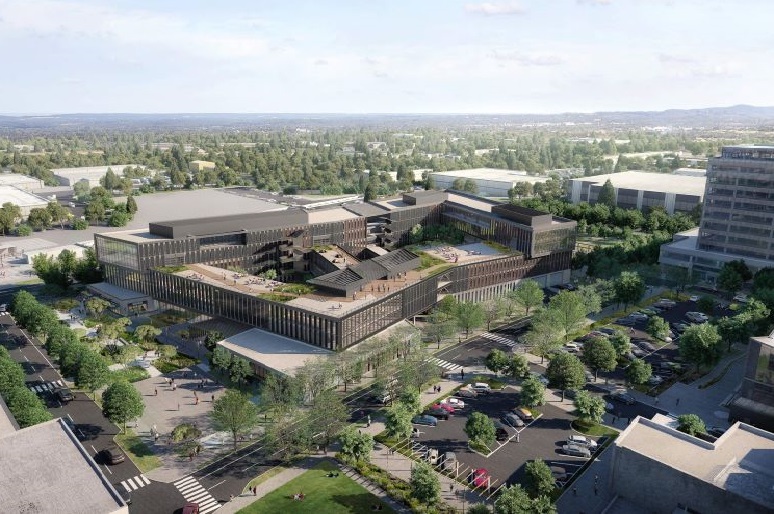 Image: REI
The story of outdoor retailer REI’s brand-new corporate headquarters is the story of office design and reality over the last five years. REI conceived the facility in 2016 as “something unexpected that embodies our co-op values… . A sustainable, transit-friendly, urban neighborhood that blends working space with green space, takes inspiration from the community around it, and connects to the rest of the Puget Sound area,” as the company stated at the time.
But due to the COVID-19 lockdown, REI never took occupancy of the headquarters, completed earlier this year. And now it has announced that it is putting the facility up for sale and transitioning to a long-term model of work from home (WFH) combined with smaller satellite offices around the Seattle area.
“Our new experience of ‘headquarters’ will be very different than the one we imagined more than four years ago,” the company stated in announcing the planned sale.
The company’s chief customer officer, Ben Steele, gave a telling quote to the Washington Post. Noting that the just-completed headquarters was meant to foster collaboration, Steele told the Post he now believes, “collaboration can happen in a lot of ways and doesn’t necessarily require a single location.”
How quickly things change.
I’ve long believed that corporate attitudes about the ideal workspace tend to involve making a virtue of necessity. When companies needed to locate offices in high-rent cities because that’s where the skilled workers were, it turned out that the open office floor plan not only was the cheapest way to house all those workers, but also just happened to be the best way for people to collaborate. Major studies said otherwise, but by then the die was cast, and the debate shifted to the best way for enterprises to tweak open office design to humanize those spaces a bit more.
Then the pandemic hit, and the best office became no office. That’s even cheaper than open office.
To be fair to REI’s Steele and the many other corporate execs who have made similar statements, they’re not wrong about WFH. Unlike previous generational shifts in office design and culture, the current WFH transformation isn’t the product of academic studies or theories propounded by MBA types. It’s a live experiment, and it does, in fact, seem to be working. Knowledge workers are productive and appreciative of the time that teleworking gives them back each day. Many crave some in-person connection, but that seems destined to be an element of the “adjustment” phase of the WFH transition, as with REI’s plan for smaller, distributed offices.
Ultimately, the decision REI made about building a new headquarters was the right one for 2016, and the decision to sell will likely prove right for 2020 and beyond. It might be tempting to mock REI for making such an abrupt turnaround, but that would be criticizing it for not being able to predict the future. This pandemic was by no means impossible to foresee, but the fact is that few people did foresee it. Five years ago, no company would have based its decision-making on such a possibility.
As I tried to think up a way to conclude this newsletter, the REM song I was listening to gave me the answer: “It’s a sign of the times.”

The move, which applies to offices in New York City and Jersey City, New Jersey, was aimed at protecting employees’ holiday plans and to thin out the number of workers coming into those facilities.

(Bloomberg) -- Just as it seemed like corporate America was on a path toward normalcy, a new wave of Covid uncertainty is upending...

Ericsson Wants Half of its 102,000 Staff to Work From Home

Ericsson, one of the largest employers in Sweden, is redesigning and cutting desk-space in its 400 offices in an attempt to shift half of its workforce to remote working.