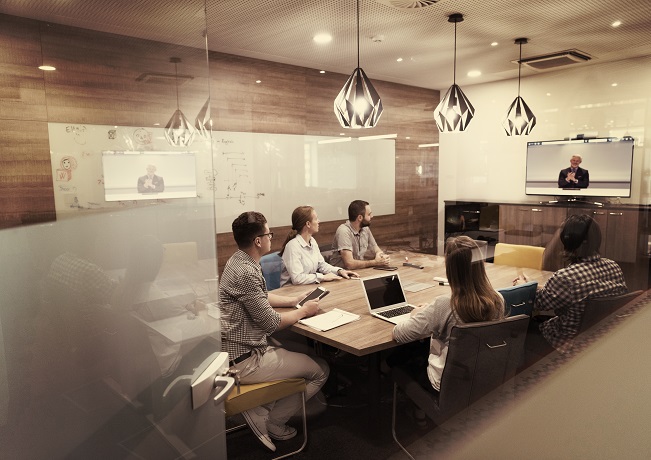 Image: .shock - stock.adobe.com
I've written about the idea that technology is allowing our meetings to spill over their borders, and become a kind of node along a line or path of collaboration around a particular idea or business need. Enterprises increasingly are able to embed video and text transcripts of meetings, whether regularly scheduled or ad hoc, within the collaboration application that also serves as the platform for all the work that team members do together.
That’s one way to make meetings more useful, by making their content more accessible and minable both by participants and non-participant team members alike. Another way to make meetings more useful is by making participation more natural—that is, making the meeting easier to find and join, and even making the “camera work” itself easier to watch so you can gain the visual benefit that we’re supposed to get from adding video to a meeting.
We got a glimpse of some emerging improvements in this area last fall at Zoomtopia, the annual event put on by Zoom Video Communications, the cloud-based video service provider that’s become one of the hottest tech companies in Silicon Valley.
The company offers several Zoom Rooms features that aim to make meetings easier to join and engage with. Highlights include:
We’ve all sat through too many videoconferences where the people on the other end look like they’re in a different zip code from the camera (a zip code where it’s currently dusk, too); you can barely recognize colleagues you know well. So vendors like Zoom are equipping video systems with the physical means (i.e., multiple cameras) and controls to function as if there were a live operator behind the camera and control console—so your focus is directed as it would be if you were sitting in the room with those other people.
And, of course, more sophisticated room scheduling and finding systems help attendees get access to more video-enabled meetings in the first place. Not only do these systems help people schedule and hold meetings, but they’re also critical to getting the most out of your meeting room deployments, ensuring that rooms don’t sit empty if a meeting gets canceled at the last minute. Along these lines, another new feature from Zoom uses AI face detection to give administrators a count of the number of people using a room at any given time. That’s another good way to optimize your planning for meeting room capacity, and these face-detection systems are, as the name suggests, different from facial recognition: The aim isn’t to track who goes to what meetings, but just to get an anonymized count of room usage.
Continual enhancements to videoconferencing will help these systems gain even more utility and thus greater adoption, while hopefully improving the quality of the collaboration. Just as it’s mentally exhausting to take part in an audioconference call where you can’t understand people or tell speakers’ voices apart, with a videoconference, you need, well, good video in order to achieve the goal of more natural collaboration with remote colleagues.

Upgrade Your Video with… No Video

… and it looks more and more like in-person meetings

Moving Through the Chaos, Back to the Office

The way forward may not be clear yet, but flexibility and a focus on long-term total cost of ownership are among basic guiding principles.

Ready for Your Closeup?

Without a "video-first" strategy, employees might be too shy to flip on the camera during meetings.

See All in Audio Visual/AV »