Upgrade Your Video with… No Video 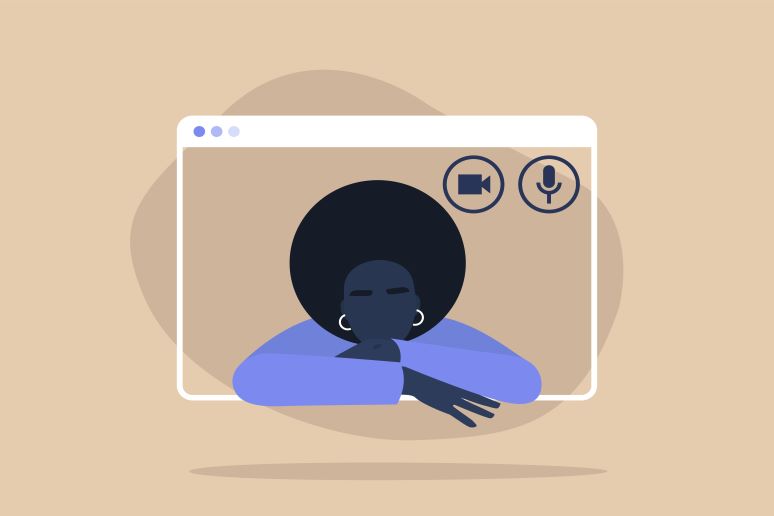 Image: nadia_snopek - stock.adobe.com
If you’ve got “Zoom fatigue” fatigue — tired of hearing people complain about video conferencing — check out this New Yorker article on some of the new applications aimed at making remoting gatherings more engaging and less… well… tiring. The author frames the problem as a search for a better party atmosphere, but the same basic principles can apply to work meetings.
The app that most caught my attention was High Fidelity, which uniquely uses only audio to try and create a better environment for virtual online interaction. The app represents each user as a colored dot, which the user can drag and drop (something that’s happened to me at a few IRL parties, hey-o!) to different locations on a virtual background. You move yourself near the person you want to talk to, and the audio you’re hearing adjusts accordingly.
Honestly, the first thing that struck me about the description of the app was the statement: “Users on High Fidelity appear as colored dots.” Because, truth be told, things have gotten to the point in my organization where, in many meetings, most of our users also appear as colored dots — that is, the user has turned off their camera and everyone else sees only the large colored circle with the person’s initials. In other words, at least in my organization, users have already maxed out on video and voted with their camera settings.
The New Yorker author praises High Fidelity’s spatial audio, a technique that Bose has been integrating into enterprise conferencing systems for years. In fact, I got my first demo of a Bose spatial audio conferencing system years before desktop video conferencing had even become even commonplace, let alone ubiquitous. And the experience really was great. At the time, the concern was audio conferencing fatigue, stemming from the amount of effort it took to pay attention in calls where it was hard to tell who was speaking. If you were in the business world during this era, you probably remember having to preface your remarks in an audio call with your name — as in, “This is Eric; I want to build on what Tom just said….” Of course, if Tom hadn’t similarly identified himself, that might not have been him anyway.
High Fidelity’s solution seems clever. Especially on calls with your team, you likely can recognize people by their voice, so that even if you’re in a cluster of people, you could probably tell who’s speaking just by the audio.
Enterprise communications providers are competing frantically to add new features to their video conferencing products, whether by adding more faces to the video grid or pulling people’s images out of the square spaces and dropping them into an environment that’s supposed to make it look the people are physically together. I think High Fidelity’s approach could offer a feature upgrade that enterprise users might actually welcome: Offer an “audio-only” mode where everyone’s video stays off, but high-definition audio and innovative visual interfaces offer a different, refreshing experience.
Fatigue happens when you do the same thing the same way for too long. Enterprise conferencing technology should consider not just the experience of each individual conference, but the user’s experience of participating in conferences all day long.

… and it looks more and more like in-person meetings

Moving Through the Chaos, Back to the Office

The way forward may not be clear yet, but flexibility and a focus on long-term total cost of ownership are among basic guiding principles.

Ready for Your Closeup?

Without a "video-first" strategy, employees might be too shy to flip on the camera during meetings.

See All in Audio Visual/AV »