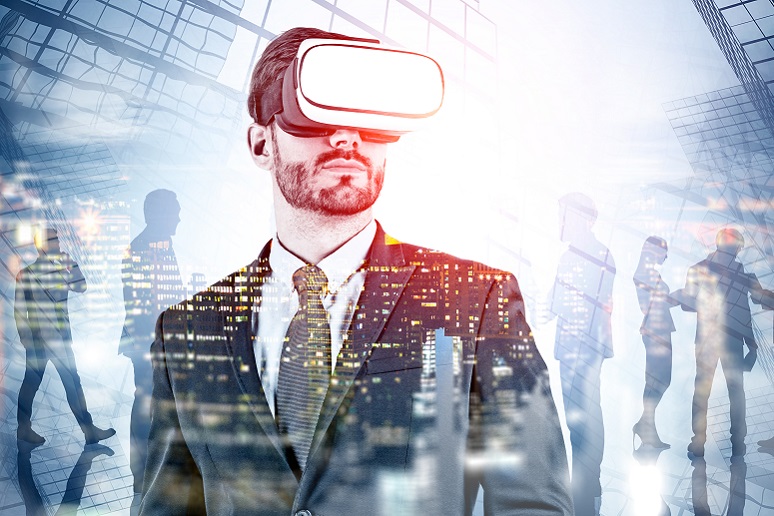 This article originally published on our sister site, No Jitter.

Virtual reality (VR) has been plagued for decades now by a lack of understanding about the problem it’s supposed to solve. There have been at least a few hype cycles over the last few decades, none of which resulted in anything resembling mass adoption. However, VR growth has exploded over the past 18 months and is finally approaching mainstream consumer use. But what about for business use? Does VR have a place outside of niche applications? Does it have a place in the unified communications (UC) suite?
When evaluating emerging technologies, I’ve always found it helpful to ask these two questions to determine if something is significant beyond the hype.
For this post, I’ll answer these questions in the context of the communications and collaboration space.
What Problem Does VR Solve?
Over the years, we’ve seen VR flounder — as a hobbyist toy, a gaming device, and a university research project. Before the pandemic, searches for VR and business only yielded results from 2008, where there was a lot of hype around the concept of a Second Life for business. This idea fizzled and was forgotten for more than a decade. Interestingly, communications vendor Nortel/Avaya developed some of the biggest innovations around VR in our industry because its Engage Live platform looked very familiar to tools like Virbela (virtual platform) that are popular today. Unfortunately, it was a bit ahead of its time and got canned as Avaya navigated the waters of restructuring.
So why now? What makes this time different than 2008?
For me, the answer came at the beginning of the pandemic, when I began to think about the question of how do we collaborate when we can’t meet in person? I was amazed to see the growth and success of video meetings but was frustrated by the shortcomings of the tools we use today.
My casual interest in VR led me down the rabbit hole of Google searches, a trip to Walmart to buy an Oculus headset, and months spent on various platforms speaking with enthusiasts and researchers from across the globe.
Almost immediately, I began to see VR in the context of a world on lockdown, quickly seeing its power VR as a collaboration tool, one very different than any of the traditional tools we use today. That’s when I began to see the problems that VR is uniquely in a position to solve, such as the following:
The pandemic forced us to think about the answers to these questions. And the immediate choices were Zoom, Teams, Webex, and other web conferencing tools.
What Does VR Do That Zoom Doesn’t?
We’ve seen web conferencing tools used in all of the above examples, with mixed results. Many areas exist where Zoom, Teams, and Webex do fine and are even preferable to VR. But there are two big areas where VR truly shines, coming closer to real-life interactions.
One of the big surprises in my journey into VR was how the experience tends to be more intimate than a video call. I know that sounds crazy and counterintuitive, but it’s exactly what I experienced. How does this happen? How can social VR with avatars be more intimate than a video call? The answer lies in the successful illusion of being in a shared space together. On a Zoom call, there’s never the feeling that the group is together in the same place. The fact that their faces are grouped in a grid doesn’t translate into the feeling of proximity. In VR, there’s an authentic feeling of being in the same space physically with other people, creating a sense of intimacy that doesn’t come across in other collaboration tools.
Nobody has ever invaded my personal space on a Zoom call. They can get as close to the camera as they want, and I never feel like they’re too close to me. In VR, this is a real phenomenon, so much so that AltspaceVR (owned by Microsoft) has a feature that you can enable that turns other avatars transparent if they get too close to you. Others invading your personal space, either on purpose or by accident, is a real thing in VR.
This sense of shared space and proximity provides an interesting opportunity to leverage VR in some unique ways. We already see solutions designed around team building and onboarding where the objective is to build relationships. This level of personal connection isn’t needed in all interactions, just as sometimes a phone call is good enough. But we will see more and more of a need to find creative ways to provide more personal connections between our remote employees as we support the long-term adoption of remote workers.
Combining these two areas provides for a completely different experience than any other technologies out there, one that comes the closest to meeting in person. That is where the real power of VR lies and why it will become a big part of our personal and business lives as a communications tool and part of the suite of UC applications.
I'll be presenting more on the topic of VR and AR at the upcoming Enterprise Connect 2021 conference, Sept. 27-29, in my session "Virtual/Augmented Reality: The Shape of Collaboration to Come." I'll go into detail about the present and future of these technologies, as well as some real-world use cases. AR and VR are no longer niche technologies — they are becoming the centerpiece of how we live, work, and recreate in the years ahead.
Stay tuned for part two, the final installment in this series, where I’ll discuss how augmented reality will be even more transformational than VR.

A work operating system enables teams to create custom applications for any workflow.