A senior IT director shares how the JPMorgan Chase workforce — a quarter-million strong — went all-in on video. 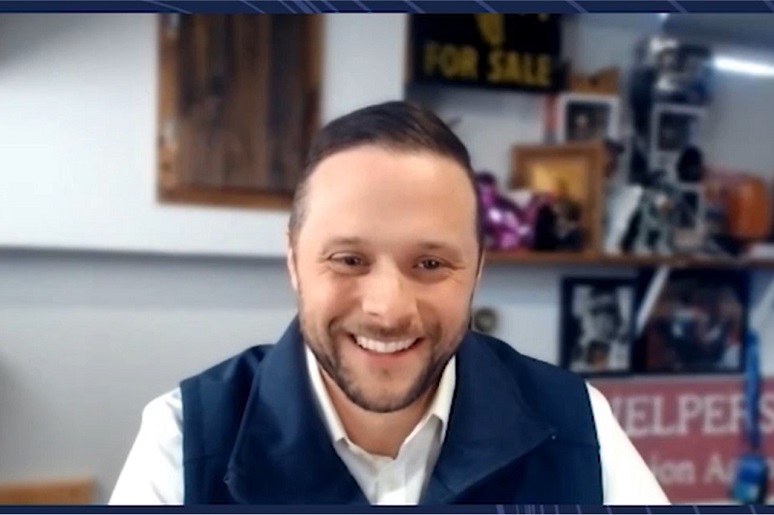 Over on our sister site for enterprise IT decision-makers, No Jitter, I shared a story today about JPMorgan Chase (JPMC) and its widespread adoption and use of videoconferencing technology. These days, given how pervasive video meetings have become in the last year, the lessons it has learned over the years are invaluable for just about any business looking to engender a collaborative, connected workforce.
The story comes via Gene Pitts, an executive director at JPMC who sat down with me for a fireside chat at a virtual conference we hosted this week. I won’t go into many of the technical details here, but the long and short of it is that JPMC’s video usage, now provided via a cloud service, is through the roof. With 250,000 employees all using videoconferencing, statistics include:
So how did JPMC, a sprawling financial institution with employees in 66 countries, manage to make videoconferencing second nature for its workforce? It started at the top, Pitts said.
Years ago, JPMC executive leadership recognized that audio calls weren’t delivering value — employees too easily disengaged by going on mute and zoning out, Pitts said. Face-to-face video communications, on the other hand, brought an emotional connection and visual, nonverbal cues that would prove valuable, especially when teams comprise people from different parts of the world, he said.
It also started with the democratization of videoconferencing, Pitts added. Executive leadership quickly realized that the value of video communications would extend far beyond themselves. A critical success factor was to make video accessible and easy to use for everybody, Pitts said. With that, JPMC built out 5,000 conference rooms with video, set up some 5,000 premium video desktops for executives, distributed video phones to some quarter of a million users, and gave everybody a simple six-digit access code so they could into any video system, at any time.
With videoconferencing so ingrained, you might think that moving to remote work during the pandemic was fairly painless. But just as JPMC is a video-first culture, it’s a work-from-the-office one, too. “I can’t say it was an easy adjustment. It was a big cultural shock for everybody,” Pitts said.
Everybody was told to go home, but nobody expected to be working remotely for more than a couple of weeks — “by and large,” Pitts said, “nobody brought any equipment home with them.” So, like most every other organization, the company went into reaction mode. “One of our first challenges was that the workforce now had a whole bunch of bring-your-own-devices — their personal laptops or smartphones or what have you.” That meant a lot of time spent enabling them to work from home and providing guidance on where to get the right headset and camera so they could do their business. With such an enormous employee base, JPMC couldn’t issue devices to everyone itself, he added.
As JPMC went into shutdown, it also became clear that it was going to have to fast-track a migration it had planned from an on-site videoconferencing system to the use of a cloud video service. That required a rethink around user rollout and adoption processes, so IT set up a just-in-time provisioning system. “Just by logging into the new videoconferencing system, they were getting an account. They didn’t have to go through the [request-approval] bureaucracy that is normal in a large company,” said Pitts, adding that JPMC onboarded 180,000 of its employees to the new cloud video platform in 10 business days. “If we had done anything, even like put up a webform barrier to ensure they read some rule, it just would not have gone off in the same way,” he said.
If that sounds too easy to you, it did to some of his users as well, Pitts said. “They were like, ‘Well, there’s got to be more to it. What’s wrong here that I was able to get into my meetings and just do it?’”
But just being able to do it, is, in fact the whole point, Pitts noted. “It’s really just making it more democratized, more available for people to use — getting those one-click-to-join experiences … out to people,” for example, he said. People aren’t “there to use these platforms. [They’re] there to communicate, so you have to remove all that friction in the tools as best you can.”

When purchasing communication services for your hybrid workforce, don’t overlook these challenges.

At Enterprise Connect 2022, several speakers identified the influences enabling the future of work from a cultural and technological standpoint.

Microsoft Forms is a free and powerful survey and quiz tool included in all business subscriptions of Office 365.

The head of digital workspace practice for World Wide Technology outlines how experience parity is a whole-workplace problem to solve.

The fourth installment in this ongoing video series looks at ways to create great video experiences and what technology is needed.

See All in Enterprise IT »