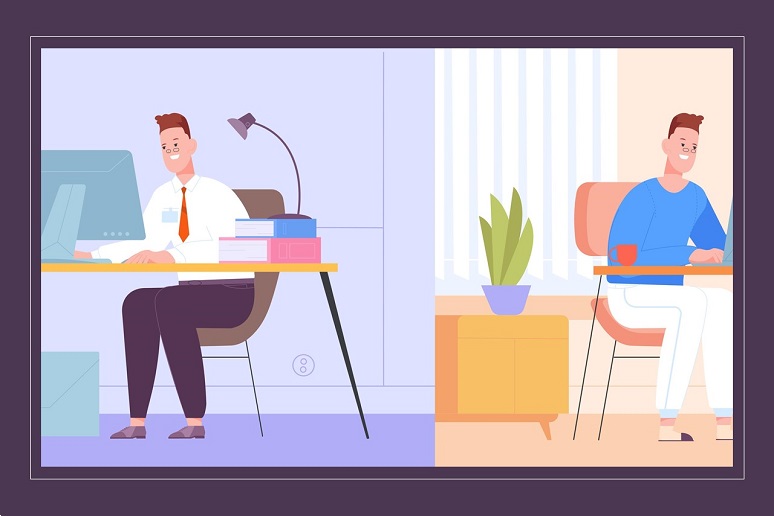 Image: Tatiana Egorova - Alamy Stock Vector
Welcome to the latest WorkSpace Connect News Wrap, our periodic recap of the news related to the modern workplace, the professionals that make it happen, and the products and services that enable it. In this edition, workers would take less money if it means more hybrid work—a development that worries cities seeing fewer workers who plan to spend less. Also, Huddly and Barco have teamed up on a plug-and-go meeting room solution.
Workers Continue to Tell Employers They Prize Time, Hybrid Office Over Money
Workers continue to demonstrate how highly they value a hybrid schedule that allows them to reduce commuting time and in-office presence. At the Federal Reserve Bank's "Future of New York" conference, Stanford economics professor Nicholas Bloom presented the results of a recent survey of 7,787 American workers. The survey found that tech workers value working from home two to three days a week as much as an 11% pay increase.
“Employers value working from home—they really like it, as it’s a huge hiring and retention policy,” Bloom said. “Why wouldn’t you do something that makes them more productive and happier?”
Reported Bloomberg:
About one-quarter of all work time will be spent at home going forward, up from 5% before the pandemic, Bloom said, with productivity increasing by about 5% as technology improves, children return to in-person schooling, and workers get more comfortable with remote environments. In the years to come, the share of time at home could increase by another 25%, he said.
The rise of hybrid workers makes city planners nervous because workers who spend less time in a city also spend less money in a city. The average New York City office worker intends to reduce time in the office by 49% and slash their annual spending in the city by $6,720. Meanwhile, the average San Francisco office worker wants to cut how many days they spend in the office by 53% and plans to cut their annual spending by $5,293.
Commercial real estate holders are also nervous. According to Bloom's presentation, New York City office attendance is still below 40%. HSBC economist James Pomeroy recently reported that office attendance rates have struggled to get back above 40%. He used data from physical security firm Kastle Systems, which showed that Austin, TX, leads the country with the highest occupancy rate—still only 53%. “With offices only half full in most of the developed world, many will be expecting office occupancy to grind higher. However, it’s worth keeping in mind the alternative: occupancy could already be close to a peak,” Pomeroy said.
Huddly, Barco Team Up on Plug-and-Go Play Huddle Room Solution
Huddly, which makes AI-guided videoconferencing cameras, has teamed up with the Belgian digital projection and imaging company Barco to offer a videoconferencing solution aimed at smaller collaborative spaces. Clickshare Conference combines Barco's one-click collaboration system hardware with the Huddly IQ meeting room camera in an out-of-the-box huddle room set-up. After the hardware is set up, meeting participants can fire up different unified communications platforms—the companies listed their solution as compatible with Zoom, Microsoft Teams, and Webex by Cisco—then wirelessly cast their conference to the meeting room screen.
Nils Stangnes, executive vice president of global channel sales, Huddly, said, "Barco shares Huddly's commitment to developing innovative technologies that simplify hybrid teamwork and promote an equitable video meeting experience. The combination of Barco's wireless conferencing solutions with our software-based, AI-powered Huddly IQ camera makes it easy for our customers to establish hybrid meeting rooms where everybody is seen and heard and collaboration can flourish."