The huddle space faces an uncertain future. But with creative video options, it doesn’t have to disappear entirely. 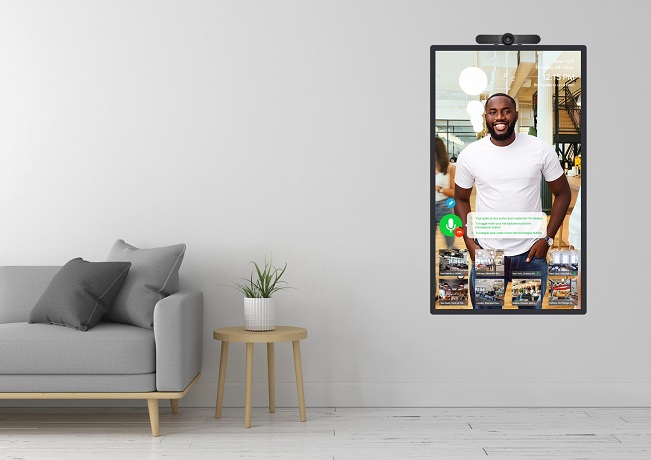 Image: Collaboration Squared
In a recent post, “Huddle No More,” I wrote about the impending demise of the once-vaunted huddle space, a sure victim of re-occupancy crews tasked with rethinking offices around mitigating the spread of pandemic-inducing germs. What I had failed to think about is moving the huddle concept forward with a virtual form factor.
Lucky for future workplace collaborators, innovative thinkers have already landed on this idea. Some of those people are at ArgoDesign, and the idea there is a 3D video interface called the Square. I came across the Square in a late April Fast Company article, and have since seen it written about in Forbes, as well. Everybody’s scrambling to figure out what knowledge work of the future might look like, and the Square is an interesting tech take.
Here’s the description from the Fast Company write-up: “It’s an artificial window, created from an LCD screen that goes on the wall next to your desk. When you raise the shade, you can see a coworker, or two, working right there next to you. You can strike up a conversation, or ignore them. You can gossip, or hold a productive meeting. Just like a real office.”
Just like a real office, the Square would also allow for the quick collaborative small team huddle. That comes via a pod mode that “blends the video geometry between not just two, but three people, creating a convincing simulation of a small meeting room,” as Fast Company reported. With this, the Square becomes not just another means of video chatting with remote colleagues, but “morphs the home office into a true coworking space,” the article continued.
We’ve seen similar “view into the workplace” concepts productized, such as is the case with the Video Window from a company called Collaboration Squared. As I’ve written about previously, on our sister site No Jitter, this product is all about enabling collaboration among distributed teams, too. As originally envisioned, the always-on Video Windows would be set up in office common areas, with sometimes during the day assigned to teams for its use for virtual meetings and others open for quick “water cooler chats.” A “knock, knock” feature allows a team member to tap on the screen to provide an audio attention-getter to a connected Video Window on the other side. The Video Window also supports whiteboarding, semi-transparently on top of the video.
While social distancing may make that use case infeasible for team gatherings of more than one person at each end — and even then only once people return to the office, Collaboration Squared has adapted to the work-from-home shift, expediting development of a remote worker version, as Daryl Hutchins, CEO and co-founder shared in a recent LinkedIn post. Similar to the in-office experience, the Video Window app would run on a PC, Mac, or Linux machine and allow a team member to toggle the video, camera, and audio feeds on and off as desired throughout a day to communicate with others remotely.
The aim is to make remote workers feel connected at all times, with the ability to see a live status of the other people and devices in an assigned group, he wrote. And, even when video is toggled on, audio is off by default until flipped on. That way, a remote worker could see that other team members are conversing but not “distracted unnecessarily” by those conversations and choosing only to drop in when fitting, he added.
So, yes, the huddle space as once defined faces an uncertain future. But with creative video options, it doesn’t have to disappear entirely.