If You Can’t Be There, Beam In

CEO of PORTL, a hologram technology company, shares his vision for the future of communications. 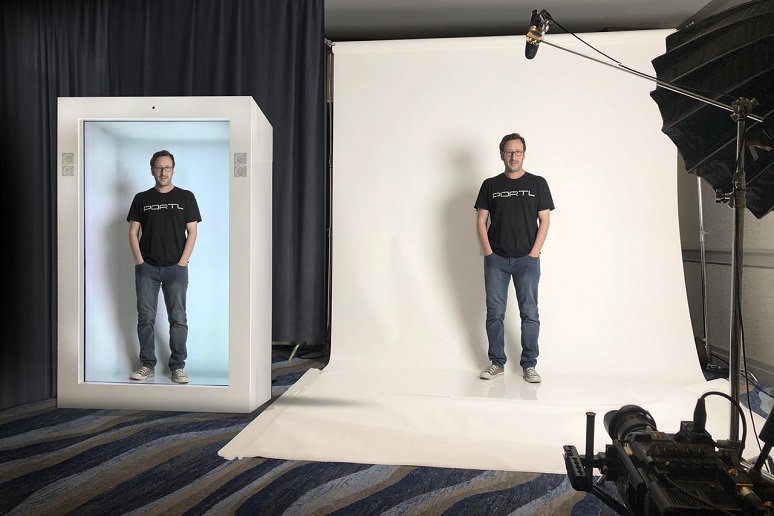 Image: PORTL
Rather than stepping outside the box on communications and collaboration in return-to-office planning, how about getting inside it instead? Of course, I don’t mean just any box, but rather one that will take your organization’s virtual meetings to a whole other level by allowing remote participants to and project themselves in real-time from wherever they are to wherever they need to be.
Such is the promise of two-year-old startup PORTL, which couples its hologram technology with cloud-based software and a proprietary content management system to beam people and content into PORTL boxes that project their lifelike presence at a remote site. And at the far end, employees can use a touchscreen for interactivity with the content being presented. Think of “masterclass meets hologram experience,” David Nussbaum, CEO of PORTL, said in a WorkSpace Connect briefing.
Within the enterprise, imagine a CEO living in Silicon Valley but whose executive leadership team works at the East Coast headquarters. Rather than having to fly cross-country or conduct face-only video calls, that CEO could stand among them, so to speak, by participating as a hologram via PORTL. to travel. Or, the CEO could convene an onsite all-hands-on townhall at that location, but rather than using conventional video broadcast technology, the executive instead uses PORTL’s hologram technology.
Wherever a company would want the projection, it would require a PORTL machine. For now, the company offers the PORTL Epic, a rectangle-shaped hologram machine that stands seven feet tall and comes equipped with 4K resolution, a built-in motion sensor-enabled camera, and high-fidelity speaker. Nussbaum got a bit techie in describing how PORTL works, talking about things like volumetric effect, shadow reflection depth, dimension, and “pepper’s ghost” image projection technology responsible for putting the much-talked-about Tupac illusion on stage at Coachella 2012, but the bottom line is that this all ends up making it possible to simulate a person inside the box.
PORTL Epic has gained popularity in the event space, but hasn’t gained traction in the enterprise to date. Cost could be a factor. The plug-and-play PORTL Epic retails for $60,000 with an annual fee for the software, data analytics, and livestreaming. On top of that would come studio costs for capturing content; for help with that, PORTL offers three studio-level kits featuring 4k camera studio lighting, audio, and “all of the necessary production equipment needed to create the “PORTL effect” that gets beamed,” Nussbaum said. The company also sells travel cases, priced at $7,500, for buyers that don’t plan on using PORTL for permanent installation.
More attractive for the collaborative enterprise could be mini and corner versions, which the company is expecting to release in the second half of this year. Although PORTL hasn’t released pricing for these models yet, it has designed these free-standing units to fit inside of a conference room with limited space.
If you can see hologram meetings as a future for your organization, you might start investigating now. Among other stakeholders, for example, IT will have to vet the communications and collaboration technology, real estate/facilities will have to ascertain how to bring the boxes into conference rooms or elsewhere around the office, and HR will have to figure out policies around the use of projected presence. But, if you embrace Nussbaum’s intentions of bringing “the best of the world to the rest of the world” for your organization, then the legwork may be well worth it.