A workplace robotics technology company extends beyond telepresence to target another pandemic use case: office disinfection. 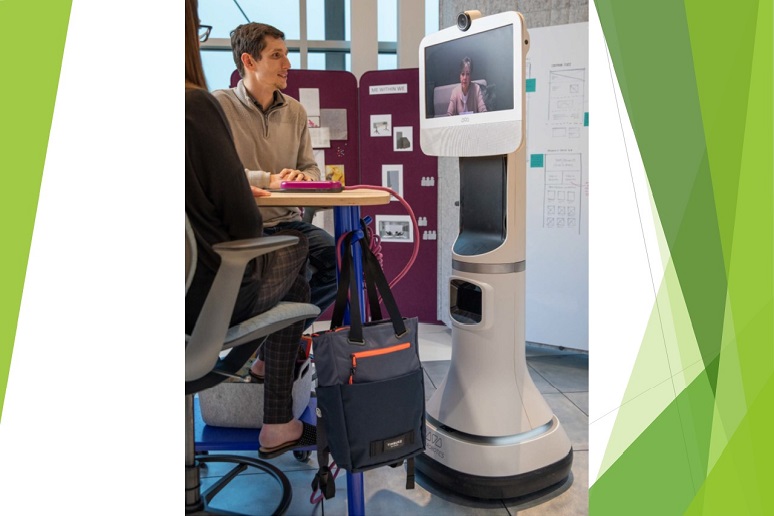 Image: Ava Robotics
When you see or hear the term “iRobot,” you’re likely to visualize a disc-shaped vacuum cleaner that autonomously moves around a floor, swooping up dirt along the way. Well, imagine if that robot instead stood about four-and-a-half-feet tall and came embedded with videoconferencing technology or a UV disinfection system — two elements of most any return-to-office planning. Now imagine that you could get either from a single source — Ava Robotics.
Workplace Collaboration
Ava, a workplace robotics technology vendor that spun out of iRobot, first set its sights on building a telepresence robot, taking a page out of the vision book of Youssef Saleh, the company’s founder and CEO. In launching Ava, Saleh wanted to find a way to leverage his experience in the videoconferencing and telepresence, honed over the years working at Polycom (now Poly), as I learned in a WorkSpace Connect briefing.
With the robotics technology as the base, Ava tapped Cisco, a leading provider of enterprise collaboration products, for the videoconferencing/telepresence enablement via its Webex conferencing capabilities, Saleh said. Released in Mar. 2018, Ava’s telepresence robot maps the environment that it’s deployed in, and then remote users can move it, without having to drive it around by hand.
When discussing how Ava telepresence robots work, Saleh said he likes to use the word “teleport.” That’s because the robot allows people to be anywhere they want — today, no doubt, working from home — and “teleport to places where they want to be,” with a single press of a button, he said. “Now I am in that space, I move about and do whatever I want to do. When I'm done, I say ‘bye’ and the robot goes back to where it needs to go,” Saleh said.
Steelcase, an office furniture company, uses Ava telepresence robots to optimize the collaboration experience among disparate teams located in Toronto and Grand Rapids, Mich., as explained by Gale Moutrey, VP of global communications for Steelcase. For example, Moutrey described working from home but moving the telepresence robot around the building to have independent conversations as if she were physically present.
Workplace Cleaning
With a safe return to office on the agenda for this year, Ava earlier this month introduced its second workplace robot, an ultraviolet (UV) disinfection robot that should help promote confidence in the workplace, Saleh said.
Once a company maps and stations the UV disinfection robot inside a workspace, an administrator will be able to log into Ava’s Facilities Manager Hub to schedule disinfection treatment. At the scheduled time, the robot will turn on its UVC lamps and navigate throughout the designated area. When finished, the lights will power off and the robot will move back to the charging station. Once attached, the admin will receive a report via email, Saleh said.
The UV disinfection robot will be available early next quarter, Saleh said. Ava has not disclosed pricing.
Workplace Future
Look for Ava to continue expanding its portfolio — and for people to get more and more comfortable with having robots in the workplace, Saleh said. “Robots will be in the workplace doing many different things specific to their work, work from home… people feeling connected will be critical, and will transform the way people think about how they collaborate.”