This Danish company sets out to reduce video fatigue and deliver a more human experience for certain types of meetings. 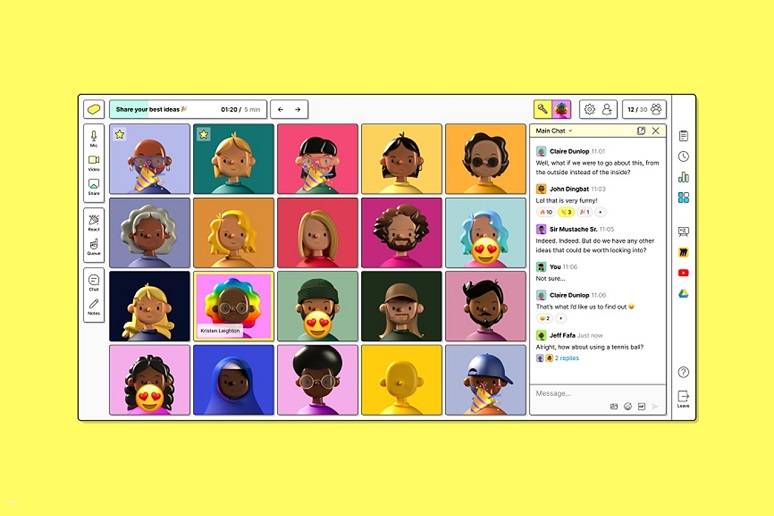 Image: Butter
If your organization is creating interactive workshops, training sessions, and live courses for onboarding and other purposes, you might want to include some Butter — a platform aimed at delivering all the necessary tools to engage participants and provide the opportunity for collaboration.
By “all the necessary tools,” this Danish startup means video software plus workshop-specific tools to facilitate capabilities such as whiteboarding, interactive presentations, note-taking, and messaging. Some of the capabilities come through third-party integrations; at the moment, Butter integrates with Miro, for online collaborative whiteboarding; Google Drive, for interactive work on documents, slides, and worksheets; and YouTube, for sharing videos.
Butter’s goal is to divert people away from general video meeting tools like Zoom and Microsoft Teams, which it considers ill-suited for training workshops or complex collaborative sessions, Jakob Knutzen, Butter CEO and one of three co-founders, said in a WorkSpace Connect briefing. In addition, Butter sees its platform as a replacement for real-time project management tools like Basecamp, he added.
In particular, Butter set out to address two pain points for workshop facilitators, such as HR trainers: technical complexity and difficulty in achieving employee engagement during workshops, Knutzen said. Without a workshop-oriented approach, general meeting services often mean trainers and facilitators must send links around for supplemental apps, and participants must jump between screens. With Butter, rather, “we want to build a full workshop experience into one tool,” Knutzen said.
To encourage interactivity, the Butter platform features a hands-up queue that provides users the opportunity to be heard and enables differentiation between comments and ideas to share, as well as a reaction soundboard that lets a participant select a thumbs-up emoji to agree or a shrug emoji when they’re indifferent to an idea, for example.
Butter's platform, which can accommodate up to 200 people per workshop, allows hosts to personalize their meeting waiting room with a cover photo and music, add an agenda that remains visible throughout the workshop, set timers to keep themselves on track, create polls, and require a “request to join” link for participants. In addition, facilitators can break participants into smaller work teams, hop between them for status checks, and broadcast messages to all breakout rooms, Butter said.
Upcoming updates include meeting analytics, a mobile version for participants, and a desktop app for facilitators and participants, Knutzen said. Currently, Butter is available as a web app.
Butter is also working to beef up functionality for facilitators, Knutzen said. Eventually, facilitators will be able to plug individual activity blocks into their agenda, then launch those with a press a next button, Knutzen described. For example, the intro portion of an agenda might feature three activity blocks: an icebreaker poll, a quick randomized one-on-one “get to know somebody” breakout, and a presentation by the facilitator, he said. “The workshop builder is still work in progress, but we're aiming to let people construct their workshop
from a number of activities as building blocks, with the agenda points as sections,” Knutzen said.
Butter is available as a freemium app. A subscription plan will follow at a later date.

Workplace leaders are swimming in a sea of occupancy data, so fishing out key metrics and analytics is crucial to making sound workplace decisions.