What to Know About the Four-Day Workweek Debate in California

A global movement to work shorter hours has begun picking up momentum — with plenty of research to support this idea. 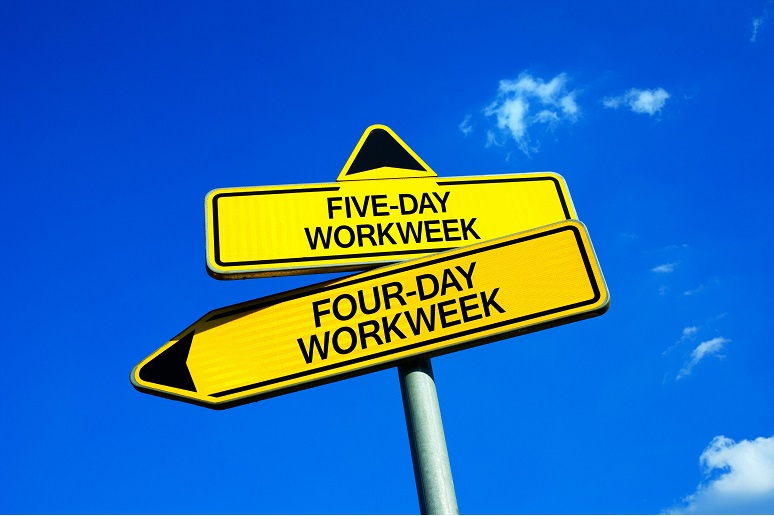 Amid talk about the Great Resignation is a parallel discussion about the Great Reset — a phrase popularized by the World Economic Forum — and the opportunities the Great Reset presents for changing the modern world of work. We've already seen how workers are questioning why location should be a condition for some employment; now folks are moving from the question of where to work to when to work. Over the past year, the idea that workers should have shorter workweeks has begun picking up momentum, and some companies.

A bill introduced by California state representatives Cristina Garcia and Evan Low would change the state's definition of an official workweek from 40 hours per week to 32 hours per week. Assembly Bill 2932 would also require employers to pay employees the same amount for 32 hours as they would for 40 — effectively giving employees a 20% raise. What's more, employers would be required to pay time-and-a-half for any work done in hours run over 32 a week and pay double wages for any work stretching past 12 hours a day or into seven days a week. The new regulations would apply to businesses with more than 500 workers, with some exemptions, including employers, which have a collective bargaining agreement with a union.
The California Chamber of Commerce has come out against the bill, arguing, "AB 2932’s impact on labor costs in California will discourage job growth in the state and likely reduce opportunities for workers."
Computerworld reported:

Thomas Lenz, a lecturer at the USC Gould School of Law, told Computerworld the legislation “may create cost and operational hurdles for employers struggling to meet staffing goals.” He added that, should the legislation pass, employers with over 500 employees might consider scaling back their operations “to minimize risk and potential exposure.”

Private companies have experimented with four-day workweeks to see how a reduced schedule impacts productivity. As CBS News reports:

The Denver-based company Uncharted tested out a four-day workweek in 2020. They found that 92% of employees favored it but CEO Banks Benitez wanted to know the business wouldn't suffer.

He brought in a third-party monitor to track productivity over the 90-day trial — he discovered that business changed for the better.
"It's changed everything. It reduced workplace stress, reduced burnout. We saw no reduction in productivity. So, our team was able to continue to produce at the same level of quality and quantity of output and every Friday was off," Benitez told CBS News' Kris Van Cleave.
The idea of a four-day work week has gained momentum during "the Great Reset," i.e., the idea that the pandemic-era disruptions to formerly-standard workplace practices like working in an office have created an opportunity to examine and change other workplace conventions like the five-day work week Henry Ford popularized in the 1920s.
In July 2021, U.S. Representative Mark Takano (D-California) introduced H.R. 4728, a proposal to amend the Fair Labor Standards Act of 1938 to reduce the standard workweek from 40 hours per week to 32 hours per week.
On April 1, nonprofit group 4 Day Week Global kicked off a six month pilot program with 38 participating companies, where the participants will try a four day work week and report back on productivity. As CNBC reported:
“More and more companies are recognizing that the new frontier for competition is quality of life, and that reduced-hour, productivity-focused working is the vehicle to give them that competitive edge,” 4 Day Week Global CEO Joe O’Connor said.
There is both worker enthusiasm for the idea of a shorter workweek — a recent survey by Qualtrics found that 92% of U.S. workers are in favor of a shortened workweek — and a growing body of research supporting the idea that shorter workweeks can improve company operations. Per CNBC:
63% of businesses said it is easier to attract and retain talent with a four-day week, according to a 2019 report by Henley Business School in the U.K. In addition, it found that 78% of employees with four day weeks are happier and less stressed.
Overseas, Iceland has shifted to a four-day work week norm, while Belgium announced plans last month to follow suit. Japan recently proposed that companies allow staff to work four days a week, as did Spain is trying it out as well. Ireland is launching a four-day workweek in January 2023.
As for California, Assembly Bill 2932 co-sponsor Garcia said, "After two years of being in the pandemic, we've had over 47 million employees leave their job looking for better opportunities,. They're sending a clear message they want a better work-life balance — they want better emotional and mental health, and this is part of that discussion."
Employees’ increased prioritization of their own wellness has been an ongoing story in the modern workplace – we’ve run plenty of news items noting how employees who have more control over their hybrid or remote workplace report higher levels of wellbeing and job satisfaction. With the expanding conversation around work week duration, workplace leaders and managers now have another factor to consider as they figure out what the employee experience is going to look like in the modern workplace.