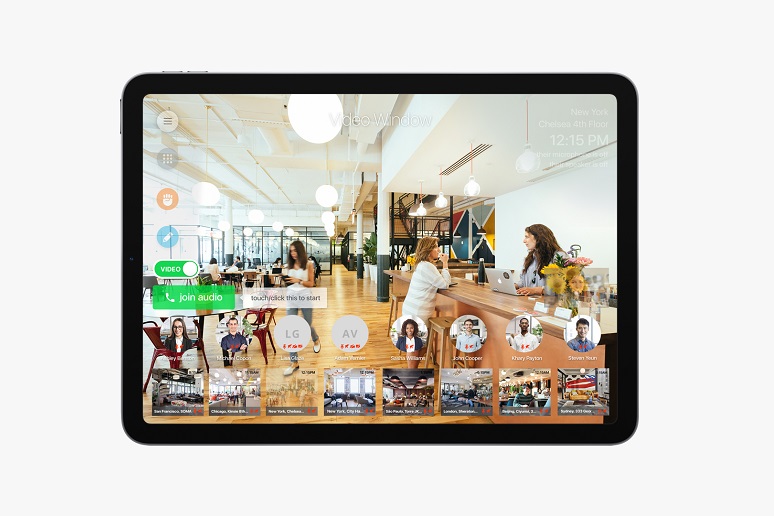 In the debate over work from home’s post-pandemic durability, oft-cited downsides include rising feelings of isolation and disconnectedness among remote workers, as well as the seemingly inevitable return to a state of second-class citizenship for people not physically present among colleagues.
Using technology to combat these issues is nothing new to Collaboration Squared, which launched its immersive videoconferencing portal back in the halcyon pre-pandemic days of spring 2019. At that time, Collaboration Squared pitched its Video Window portal as a complement to in-room or desktop video meeting technology for one particular use case: distributed teams.
As I wrote at that time on our sister site, No Jitter, the idea was to provide remote team members an always-on window into the workplace throughout the day to enhanced human connection and improve team performance. That window appears as a video screen within the office, typically placed within a common area, and feeding video to the remote site. Pressing a button on the screen initiates audio while tapping on the screen provides an audio attention-getter to a connected Video Window that’s muted. The Video Window also supports whiteboarding, semi-transparently on top of the video, and is also usable for transition video meetings.
With the pandemic came the opportunity to expand the use case to work from home, which Collaboration Squared did with a version of Video Window that could run on desktops. But soon enough, the company discovered a rub: As workers hopped from one virtual video meeting to another throughout the day, they found they couldn’t really use the always-on Video Window on the same computer, Daryl Hutchings, CEO and co-founder of Collaboration Squared, shared in a recent briefing.
Enter the company’s newly introduced Video Window Remote for iOS and Android. Now once a worker has downloaded the Video Window Remote mobile app, they can use a tablet or smartphone as their window into the office. In other words, Hutchings said, a worker can run Video Window in a display separate from the one they’re using for video meetings and “still feel present and connected to the office.”
Remote workers do, of course, need to enter their credentials before gaining visibility, and Collaboration Squared has added a variety of other features aimed at safeguarding both ends of the connection. For example, Video Window Remote doesn’t allow guest access, launches with audio- and video-off defaults, and goes into sleep mode after a worker’s scheduled hours.
Additionally, remote users appear in the Video Window interface in small circles, while office devices show as squares. When nobody is on the audio, the view defaults to and rotates through full screens, office by office, to provide that feeling of immersion Collaboration Squared strives to deliver, the company said.
“Remote workers need easy, immersive connections to their HQ in order to level the playing field and feel included, and with this everybody has that chance to feel connected — it doesn't matter where their location is,” Hutchings said.
What’s more, even when companies bring workers back into the office, they’re not likely to allow a lot of travel among locations — or at least initially. So, Hutchings noted, even as Collaboration Squared works to downsize its footprint, it’s also working with customers to extend their office deployments from common areas to conference rooms.